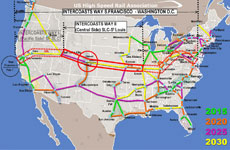 As it was refer already in a previous article, “Hihg Speed Netwotk in the United States” number 4, December 2016, 360.revista Alta Velocidad, the “intercoasts” way San Francisco Airport-Washington D.C. belong to the general system of the High Speed Railway of the U.S.A., but it presents a singularity of federal exploitation, that hold it up allowing an progressive advance of the USA interstate communication. A second part, according to the physiographic division of its territory, from West to East, concerns to the Central side, from the tablelands of the Rocky Mountains, by the Great Plains ,till the Mississippi River. This second part of the railway is formed by the lines Salt Lake City – Denver (“Rocky Mountains” of the “Utconmar “ Project), Denver – Kansas City (“Old Spanish Trail” of the “Interplains” Project) and Kansas City–Saint Louis (“Missouri Line” of the “Mississippi Connection”Project).

The article describes these lines, giving a summary of characteristic figures, construction budget and a proposal of exploitation of this second part “Central side” of the intercoasts railway.