Test and Certification of Railway automation and digitalization approaches (Rail 4.0) 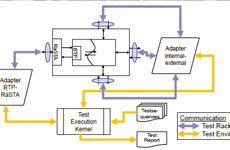 The current industry mega-trend of digitalization –sometimes called “Rail 4.0”, too - will lead to a major change in railway automation. The automation of railway operations will increase significantly in the coming years and will help to meet the challenges of the railways. Which of the approaches discussed currently will come into operation is depending on technical, operational and legal requirements. Many projects in Germany and Europe are currently dealing with the automation of railway operations. Therefore pilot projects can be expected in the near future.

Improved concepts for railway operation e.g. the level 3 of the European Train Control System (ETCS) using moving block, on-board integrity supervision or virtual train sets will result in even higher requirements to the accuracy and reliability of the localization. Hence some major issues are still to be solved. It is among others: Precise and reliable localization, e.g. based on sensor data fusion based on Global Navigation Satellite Systems (GNSS), reliable communication technologies robust against obsolescence, obstacle detection systems fulfilling civil and criminal law as well as cost requirements and cyber security. The contribution will focus on the last aspect: Tests need to be developed to ensure the safe and reliable behaviour of automated trains under normal and disturbed conditions. In current practice, highly automated, mechanically evaluated tests need strictly formal test cases which are unambiguously defined. If these preconditions are not met, the automation effort is high, so that it is often better to only aim for a partial solution. To get test cases of high quality, the choice of tools used for test defining them is crucial: The tools must restrict the engineer to prevent unclear definitions being introduced. They must enable the domain expert to write test cases which can readily be translated for use in the test bench.