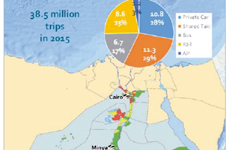 INECO developed between 2015 and 2017 a study for the Spanish Ministry of Economy and Competitiveness (MINECO) titled “Feasibility Study for a High-Speed Rail between Cairo, Luxor, Aswan and Hurghada in Egypt”. In the framework of this study, a financial model was developed that has led to the identification of break-even points that guarantee the repayment of financial costs under different investment and demand scenarios.

This scenario analysis takes on special relevance in a macro economic, financial and situational context of the real economy such as of Egypt’s during this period.

This paper presents the main conclusions obtained in the specific case of a High-Speed analysis in Egypt. It is a high-speed railway infrastructure to be developed in a middle-income country, in a corridor highly linked to tourism and in a context of economic uncertainty.

Several investment infrastructure alternatives have been evaluated, assessing the suitability or lack of suitability of making this investment in the country. From the point of view of the financial analysis, the report provides the level of demand, or income, from which the project has found its break-even point in the short and medium term, complemented by the environment conditions in which this circumstance has been estimated.

The Break-even point analysis in the short term of the Business Plan for a High-Speed line at which the system will function without an operating subsidy, as a measure of timing financial sustainability (EBITDA > 0). Additionally, the break-even point in the long term, or discounted payback, could be considered as a relevant indicator to choose among different options for the development of a high-speed network in competition with other transport modes. It can help either on how to schedule investment over time or to evaluate the financial sustainability of an investment. The views expressed in this paper are those of the consultant and do not present an official view of the Spanish Ministry of Economy and Competitiveness (MINECO).